Woog is one of the supporting protagonists in We're Back! A Dinosaur's Story. He is a blue silly-looking Triceratops and is voiced by Rene Le Vant.

Just like his fellow dinosaur friends, Woog was retrieved by Captain Neweyes' time machine aircraft and fed Brain Grain cereal, becoming intelligent and friendly in the process. He is first seen eating some hot dogs with his friends, Elsa the Pterodactyl and Dweeb the Parasaurolophus, when Rex the Tyrannosaurus Rex, another dinosaur fed Brain Grain, shows up and introduces himself. Woog greets him with hot dogs and shares regret with his past actions for when he was wild, revealing a Polyglyphanodon lizard that was stuck to his hind foot.

After the hot dog lunch, Woog and the other dinosaurs meet Captain Neweyes. Neweyes explains that he fed the dinosaurs Brain Grain cereal so that he could grant children's wishes related to seeing dinosaurs in the middle future. After seeing how many children want to see real dinosaurs, Woog and the others are amazed and agree to go with Neweyes' request.

They travel to the middle future and are dropped off at the Hudson River after being told to find Dr. Bleeb and the Museum of Natural History of New York City. They are also advised to try not to step on anybody, causing Woog to reveal the lizard stuck to his hind foot again. While admiring the beautiful city, they meet Louie, a boy who's running away to join a circus. They agree to accompany him as he goes to the circus. When Rex falls into the river and nearly drowns, Louie uses a crane to help pull him back onto land. Woog and the other dinosaurs help by keeping the crane from being pulled into the water under Rex's heavy weight. Rex is rescued, to everyone's relief, and they all venture into the city.

While hiding in an alley to avoid being spotted, Louie takes flight on Elsa to find a way to get to Central Park. While waiting, Woog gets hungry and tries getting food from a butcher shop, but is pulled back into the alley by Dweeb. Louie and Elsa eventually return with a new friend, Cecilia Nuthatch. After introducing themselves, they all join the Macy's Thanksgiving Day Parade, acting like robots so they could reach Central Park with ease. However, during the parade, Rex starts singing "Roll Back the Rock to the Dawn of Time" after hearing numerous children wish to see a real dinosaur. The song catches the audience's attention and they dance with Rex. Woog and the other dinosaurs worry, but nothing seems to go wrong until the crowd eventually discovers that Rex, along with Woog, Elsa and Dweeb, are real dinosaurs. As the crowd flees, Louie and Cecilia are separated from the dinosaurs, but tell them to get to Central Park, where they'll meet up with them. But things get worse for the dinosaurs when they discover that Professor Screweyes, Neweyes' evil brother whom they were told to avoid, has set up his circus in Central Park. Before they can find the kids, the dinosaurs are chased by the police and authorities. While fleeing, Woog and Dweeb take a motorcycle and drive around the city, getting separated in the process and sending Woog into a grocery store. Woog finds himself with a mouth and cart full of hot dogs as he accidentally crashes into a store robber, who gets hurled into prison, and meets up again with Dweeb and the other dinosaurs.

After losing the cops, Woog and the other dinosaurs go to Screweyes' circus to save their friends, but are too late, for Louie and Cecilia have joined the circus after signing a contract in their own blood. However, Screweyes strikes a deal with the dinosaurs; if they take his Brain Drain pills and revert to their wild selves, he will let the kids go, otherwise, he will keep them for his show. Woog tearfully agrees, and the other dinosaurs also agree. As a result, Woog is reverted into his wild form once again.

At the night of the show, Woog and the other dinosaurs are chained and can only watch as Rex breaks loose of Screweyes' control and tries to kill him. However, Louie manages to convince Rex to put him down, and Rex returns to his friendly self again. Woog becomes his friendly self again when Louie hugs him. Elsa and Dweeb also become friendly as Neweyes appears to take the dinosaurs and kids home.

The following morning, at the Museum of Natural History, Woog is the first to introduce himself to one of the visiting kids. He and the other dinosaurs look upon the excited kids with happy faces as they talk and have fun with them. 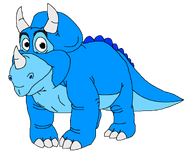 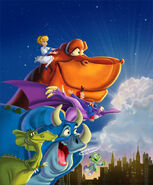 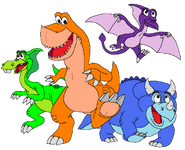 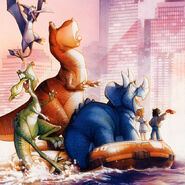 Add a photo to this gallery
Retrieved from "https://dino.wikia.org/wiki/Woog?oldid=35329"
Community content is available under CC-BY-SA unless otherwise noted.