It was based on the 1987 Hudson Talbott children's book of the same name, which was narrated from the perspective of the main character, a Tyrannosaurus Rex named Rex.

The film opens with a trio of young bluebirds harassing their youngest sibling, Buster (Blaze Berdahl). As Buster leaves his family, he meets an intelligent Tyrannosaurus Rex named Rex (John Goodman) playing golf. He explains to Buster that he was once a ravaging dinosaur, and proceeds to tell the story of how he came to become what he is today.

65 million years in the past in the Cretaceous Montana, Rex was a savage and frightening creature who terrorized smaller dinosaurs. He was chasing a Thescelosaurus. His rampage is interrupted when a futuristic aircraft arrives, and he is then greeted by a small green alien-like creature named Vorb (Jay Leno) who lures him into the craft and force feeds him "Brain Grain", a cereal that increases a creature's intelligence. Rex is given his name and introduced to other dinosaurs that have been fed Brain Grain: Dweeb the green Parasaurolophus (Charles Fleischer), Woog the blue Triceratops (Rene LeVant) and Elsa the purple Pterodactyl (Felicity Kendal), who develops an immediate crush on Rex. Later, they meet Captain Neweyes (Walter Cronkite), the inventor of the cereal and pilot of the aircraft, who then reveals his goal of allowing the children of the present time to see real dinosaurs, fulfilling their biggest wishes. He informs them that there are two people to watch for Dr. Juliet Bleeb (Julia Child), a scientist from the Museum of Natural History who will aid the dinosaurs, and Professor Screweyes (Kenneth Mars), Neweyes' insane brother. He instructs them to find Bleeb and avoid Screweyes.

Neweyes drops the dinosaurs off at the East River in 1993, where they meet a young boy named Louie (Joey Shea), who plans on running away to join the circus. Upon reaching New York City, Louie realizes that the citizens would panic if they saw live dinosaurs and, with the help of Elsa, flies over the city in search of a good hiding place. During the flight, Louie comes across a girl named Cecilia (Yeardley Smith), who was crying; she explains that her parents are hardly around (saying that her father is into business, and her mother is more of a socialite). Louie convinces Cecilia to abandon her home and introduces her to the dinosaurs (Louie and Cecilia then quickly develop an infatuation for each other).

When the dinosaurs explain their goal of getting to the Museum of Natural History, Louie decides to disguise them as floats in the Macy's Thanksgiving Day Parade. During the parade, Rex hears all the children wishing to see real dinosaurs, so he starts to sing "Roll Back the Rock (To the Dawn of Time)" (the movie's theme song). When he sees the Apatosaurus balloon coming out in the parade however, Rex mistakes it for being real and hand shakes it too tight with his claws, causing its air sealer to pop open. The balloon runs out of air and falls on the dinosaurs, who are otherwise unharmed. When the audience realizes that live dinosaurs are among them, they fly into a panic. The local authorities are called in to stop the dinosaurs, resulting in a slapstick-filled chase scene.

Believing that his friendship with Louie and Cecilia will be lost, Rex, reverting them back to their human selves (and thus wearing off the effects of the Brain Drain), tells the two to remember him.

As the kids awake the next morning, they are greeted by a circus clown named Stubbs (Martin Short). Upon seeing the dinosaurs returned to their natural vicious states, Louie and Cecilia, with the help of Stubbs, plan to sneak into that night's show and save the dinosaurs. Professor Screweyes claims he can control the now-wild Rex, which he succeeds in doing by hypnotizing him. Everyone watching the show gets frightened during the performance, and many run away. After a crow turns on a highlight, causing the hypnotic effect to end, Rex becomes enraged; then he realizes he has been tricked and tries to attack Screweyes. However, Louie steps in and desperately tells the devolved Rex that killing Screweyes would be worse than what was happening right this moment. These impassioned pleas serve to return the dinosaurs to their friendly natures. Just then, Captain Neweyes arrives in his aircraft and congratulates Louie and Cecilia, who proceed to kiss in front of a whole crowd of people; simultaneously, Elsa tells Rex her true feelings towards him, possibly sparking a relationship. After Stubbs arrives to resign from Professor Screweyes's employ, Captain Neweyes, Louie, Cecilia and the dinosaurs board the aircraft, leaving Screweyes to be devoured by the crows (who have been present throughout the movie).

The dinosaurs spend the rest of their days in the Museum of Natural History, allowing children to see live dinosaurs, fulfilling their wishes. Meanwhile, Louie and Cecilia reconcile with their respective parents, and the two become a couple. Rex returns Buster to his family before returning to the Museum of National History, humming the movie's theme song to himself.

Template:Expand section John Malkovich was originally cast as Screweyes but left due to constant script rewrites (the film's Executive Meddling also caused him to leave Hollywood and only do international productions for a few years). 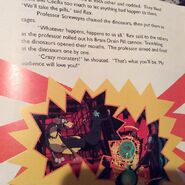 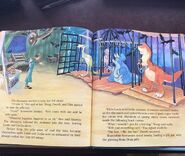 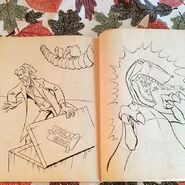 To promote the film's release, a giant helium balloon of Rex the T. Rex was included in the real-life 1993 Macy's Thanksgiving Day Parade in New York. Unfortunately, as the parade moved through Columbus Circle, high winds caught the Rex balloon and caused it to lift over the nearby sidewalk. The head of the Rex balloon struck a protruding street light and popped, but the rest of the dinosaur's body remained inflated until the end of the parade.

There were also video game adaptations of the movie released for the SNES, Sega Genesis and Game Boy.[1] The Game Boy version was altered in other regions to feature a different IP instead. In Sweden the game featured instead the cartoon character Bamse. In Australia, the game was called Agro Saur and featured the puppet Agro. In Europe, the game featured an original character called Baby T-Rex. A fifth version featuring Edd the Duck was to be released in the UK but was later cancelled.[2]

The film received mixed to negative reviews. On Rotten Tomatoes it has a 33% approval rating, based on 15 reviews (5 "fresh" and 10 "rotten").[3][4] Roger Ebert of the Chicago Sun-Times gave the film 2 stars out of 4 and wrote, "It's shallow and kind of dumb, and the animation is routine, and the story isn't much, and the stakes are a lot higher these days in the featurelength animation game". Variety's Daniel M. Kimmel gave the film a positive review and wrote, "In spite of narrative problems... the film's chief appeal is its central conceit -- that giant monsters... can be transformed into creatures who like to play with children".

A novelization of the film entitled "We're Back! Dinosaur's Story: The Novelization" was later released.

We're Back, A Dinosaur's Story 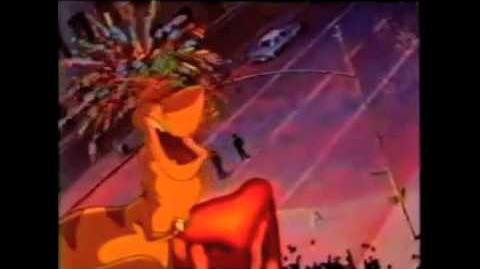