The Universe of Energy is a pavilion located in the eastern half of Future World at Epcot. The pavilion contains one attraction, its second since its 1982 opening. The current attraction, a show entitled Ellen's Energy Adventure, stars Ellen DeGeneres and Bill Nye. It features a combination of four separate large-format film presentations and a slow-moving dark ride. The Universe of Energy pavilion was previously sponsored by ExxonMobil (formerly Exxon) from opening day on October 1, 1982 through 2004.

The original Universe of Energy pavilion itself was an innovation in energy technology, as the entire roof was covered in 80,000 photovoltaic solar cells that partially powered the ride vehicles. Visitors were transported through the pavilion in large battery-powered "traveling theatre cars" that followed guide-wires embedded in the floor as opposed to riding along conventional ride tracks. The original attraction featured numerous films that presented information on the subject of energy in a serious fashion as well as a ride through a primeval diorama complete with audio-animatronic dinosaurs.

The original pre-show featured an eight-minute live-action film presentation about the various forms of energy found in nature and traced the history of how mankind harnessed these different forms of energy for his use. This unique film presentation was known as the Kinetic Mosaic and was invented by Czech film director Emil Radok. The mosaic screen consisted of 100 rotating prism-shaped flip screens (reminiscent of those on the classic game show Concentration), arranged in a twenty five wide by four high array. These flip screens rotated under computer control and were synchronized to a live-action motion picture that was projected onto their surface via five synchronized motion picture projectors. Each flip screen contained three sides, with white projection surfaces on two sides and a matte black surface on the third. The combination of the film and the screens' rotation created undulating, sometimes three-dimensional-appearing images. During the conclusion of the pre-show, the song Energy (You Make The World Go ‘Round) was played. The film was narrated by actor Vic Perrin.

Upon entering the theatre, guests were seated in one of six sections. The seating area rotated 180 degrees to face three large movie screens for the first film: a four-minute hand-animated film that depicted the beginnings of life on earth and the formation of fossil fuels. This film was also narrated by Vic Perrin.

At the conclusion of the film, the seating area rotated once again to face a curtain, which then raised to reveal a primeval diorama. The entire seating area moved into the diorama where it then broke apart into six multi-passenger vehicles that took guests on a seven-minute journey through the diorama, which was populated by numerous animatronic dinosaurs including an Edaphosaurus and two Arthropleura fighting and a family of Brontosaurus in a swamp (complete with realistic "swampy" smell), a Stegosaurus fighting an Allosaurus on an overhead cliff, several Trachodon bathing beneath a waterfall, a number of Ornithomimus watching helplessly as one of their own sank into a boiling tar pit, an Elasmosaurus that lashed out of a tidal pool at guests, and numerous Pteranodon that were perched around an erupting volcano.

Leaving the diorama, the vehicles entered the EPCOT Energy Information Center where they reassembled back into their original theatre seating formation. Here, guests viewed a twelve-minute live-action film on three giant wrap around screens that took them on an in-depth look at various current and future energy resources around the world.

At the conclusion of the film, the screens raised and the entire seating area traveled beneath them into Theatre I and rotated back into its starting position facing the audience towards a large cylindrical-shaped screen. There, guests viewed a two-minute computer-animated film that was reflected off of mirrored walls within the theatre. The film depicted an ever-evolving landscape of colorful, laser-like imagery of the various ways mankind has benefited from harnessing energy for his use and was accompanied by an upbeat song entitled Universe of Energy.

The Summer of 1996 saw many changes come to Future World East. World of Motion closed in January of that year to make way for Test Track, and Horizons was not operating consistently due to alleged structural issues with the building. The updated films for the attraction were behind schedule and with that side of Future World set to only have Wonders of Life open for the summer peak season, the decision was made to reopen Universe of Energy after renovations had been made to the pavilion in preparation for the new show.

This version of the ride featured all of the original films from the 1982 version, but lacked some of the effects. Most notably, the Kinetic Mosaic screen from the original pre-show had been removed resulting in the film being projected onto static screens and the shape-shifting effect of that film being lost. Also removed were the maps and television monitors on the wall in the EPCOT Energy Information Center in Theatre II, having already been replaced by the KNRG radio tower backdrop for the new show. For this scene, a new narration played that covered much of the same information as the original narration minus any mention of the maps and monitors. In Theatre I, the mirrors on the walls had already been removed by this point, resulting in a much less dramatic version of the finale film.

During this period, some elements for the new show had already been installed in preparation of the new show and had to be hidden. This included the Audio-Animatronic figure of Ellen DeGeneres in the Diorama. To solve this, temporary rockwork was placed in front of the figure hiding it from view. However, the Elasmosaurus figure had already been reprogrammed for the new show, leading to the awkward result of having it lunge at rocks instead of at the ride vehicles as it had originally done.

This version of the show only ran during the summer of 1996. The pavilion was closed again soon after peak season to allow final work to be done on the new version of the attraction.

The current show stars Ellen DeGeneres, Bill Nye "The Science Guy", Alex Trebek, Johnny Gilbert, and Jamie Lee Curtis. It takes a light-hearted look at various energy resources, how energy is produced, the history of energy production, and the search for new energy resources. In particular it focuses on the origins of fossil fuels such as petroleum, coal and natural gas. It also mentions renewable sources such as solar and hydroelectric power. In 2011, Ellen's Energy Adventure surpassed the original Universe of Energy show as the longest running version of the attraction.

The current attraction uses the same traveling theater system that was used by the original Universe of Energy show. The primeval diorama uses essentially the same sets and Audio-Animatronic dinosaurs as the original show, although during the renovation to the Ellen's Energy Adventure show, all of the dinosaurs were repainted in much brighter colors, several audio-animatronic figures were added along with an upbeat musical score to help tie it into the new films.

Guests view an eight-minute film in which Ellen DeGeneres falls asleep and dreams that she is in an energy-themed version of Jeopardy!, playing against an old rival Judy Peterson (portrayed by Jamie Lee Curtis) and Albert Einstein. Not knowing anything about energy, Ellen falls way behind Judy (who happens to be a professor of energy at Princeton University). And the end of Round 1, Bill Nye the Science Guy steps in and offers to help teach Ellen about energy during the commercial break.

Upon entering the theatre, guests are seated in one of six sections. The seating area rotates 180 degrees to face three large movie screens the first film: a four-minute computer animated film in which Bill Nye takes Ellen back billions of years in time to witness the Big Bang and the formation of the earth. Finally, they end up in a prehistoric jungle where he briefly explains how fossil fuels were formed.

At the conclusion of the film, the seating area rotates once again to face a curtain, which then raises to reveal a primeval diorama. The entire seating area moves into the diorama where it then breaks apart into six multi-passenger vehicles that take guests on a seven-minute journey through the diorama, which is populated by numerous animatronic dinosaurs including an Edaphosaurus and two Arthropleura fighting and a family of Brontosaurus in a swamp (one of whom sneezes water onto guests), a Stegosaurus fighting an Allosaurus on an overhead cliff, several Trachodon bathing beneath a waterfall, a number of Ornithomimus drinking from a pond (one of whom spits water at guests), an Audio-Animatronic Ellen standing near a tidal pool fighting off an Elasmosaurus with a tree branch, and numerous Pteranodon perched around an erupting volcano. As of November 2014, the Audio-Animatronic figure of Ellen fighting off the Elasmosaurus with a tree branch stopped working and was removed.

Leaving the diorama, the vehicles enter a second theatre where they reassemble back into their original theatre seating formation. After listening to a brief prehistoric broadcast from KNRG News Radio (which features the voices of Willard Scott and Chris Berman), guests view a twelve-minute live-action film on three giant wrap around screens in which Bill Nye takes Ellen on an in-depth look at various current and future energy resources across the United States. Actor Michael Richards makes a brief cameo as a caveman near the beginning of the film.

There is one Hidden Mickey towards the beginning of the Theatre II film; it is only on-screen for 3 seconds.

At the conclusion of the film, the screens raise and the entire seating area traveles beneath them into Theatre I and rotates back into its starting position facing the audience towards a large television-shaped screen. The final two minute film presents the end of Ellen's dream in which she uses her new knowledge about energy in Round 2 to unseat Judy as Jeopardy! champion.

Disney has a tradition of paying homage for former attractions, the original Universe of Energy show being one of them:

Similar to other Epcot pavilions, the Universe of Energy pavilion can be booked for corporate special events and group functions. The large indoor spaces within the attraction allow ample room for dinners, receptions, and other planned events.

Dinosaurs featured in the ride 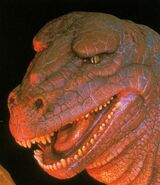 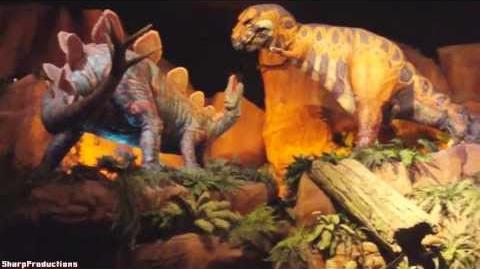 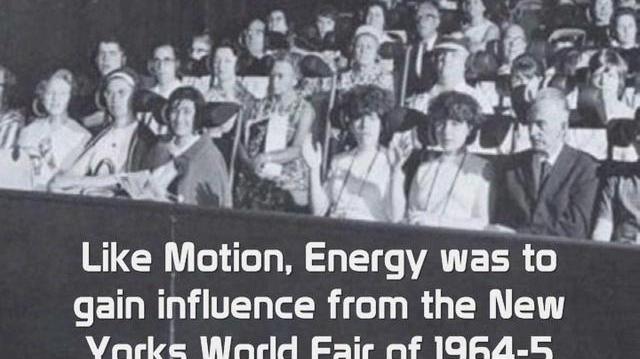 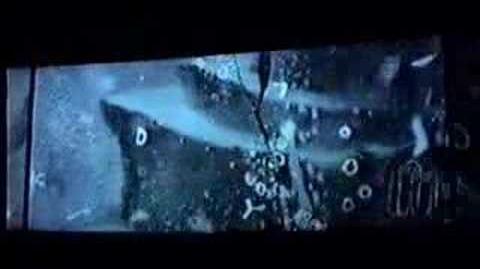 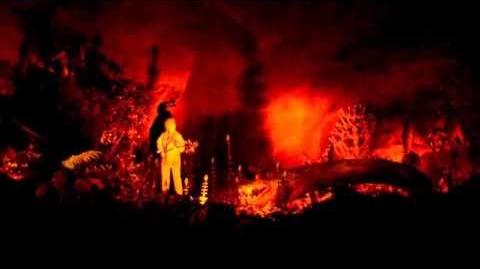 Retrieved from "https://dino.wikia.org/wiki/Universe_of_Energy?oldid=34797"
Community content is available under CC-BY-SA unless otherwise noted.