Sinornithosaurus (derived from a combination of Latin and Greek, meaning 'Chinese bird-lizard') is a genus of feathered dromaeosaurid dinosaur from the early Cretaceous Period (early Aptian) of the Yixian Formation in what is now China. It was the fifth non–avian feathered dinosaur genus discovered by 1999. The original specimen was collected from the Sihetun locality of western Liaoning. It was found in the Jianshangou beds of the Yixian Formation, dated to 124.5 million years ago. Additional specimens have been found in the younger Dawangzhangzi bed, dating to around 122 million years ago.

Sinornithosaurus was among the smallest dromaeosaurids, with a length of about 90 centimetres (3.0 ft). In 2010, Gregory S. Paul gave higher estimations of 1.2 metres and three kilogrammes.

Sinornithosaurus makes an appearance in the episode Feathered Dragons in Planet Dinosaur, where it is first shown to prey on a smaller relative, Microraptor, but fails. Sinornithosaurus is later shown to have a poisonous bite by comparing its teeth to the Gila Monster lizard. A pack of Sinornithosaurus have taken down a Jeholosaurus with the help of their poison.

Lately, the theory of Sinornithosaurus being venemous has been doubted, or even disapproved by the paleontologists. 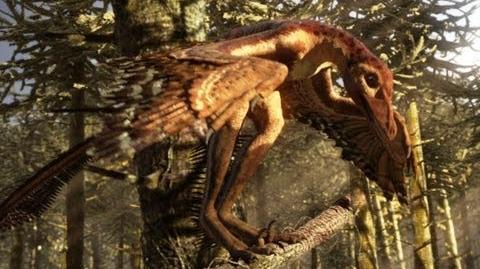 Sinornithosaurus A poisonous bite - deadly day or night - Planet Dinosaur - BBC
Add a photo to this gallery
Retrieved from "https://dino.wikia.org/wiki/Sinornithosaurus?oldid=33941"
Community content is available under CC-BY-SA unless otherwise noted.