Robbie Sinclair (full name Robert Mark Sinclair) is a Hypsilophodon, and Earl and Fran Sinclair's teenage son on Dinosaurs. Although beginning the series at 14, Robbie celebrates his fifteenth birthday in the first season episode "The Howling". Intelligent but conflicted, Robbie is frequently torn between teenage hormones and general rebellion and more specific questioning of such institutions as Hurling Day or the general motives of WESAYSO and the Chief Elder. 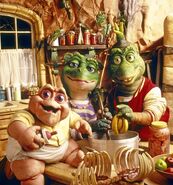 Retrieved from "https://dino.wikia.org/wiki/Robbie_Sinclair?oldid=19039"
Community content is available under CC-BY-SA unless otherwise noted.