Procompsognathus is a genus of small theropod dinosaur that lived during the Late Triassic Period, about 222 to 219 million years ago. Procompsognathus was named by Eberhard Fraas in 1913. He named the type species, P. triassicus, on the basis of a poorly-preserved skeleton found in Württemberg, Germany.

The name is derived from Compsognathus meaning 'elegant jaw' (Greek kompsos/κομψος meaning 'elegant', 'refined' or 'dainty' and gnathos/γναθος meaning 'jaw'), which was a later (Jurassic) dinosaur. The prefix προ/pro implies 'before' or 'ancestor of', although this direct lineage is not supported by subsequent research.

Procompsognathus may have been about 1.2 meters long (4 ft). A biped, it had long hind legs, short arms, large clawed hands, a long slender snout with many small teeth, and a stiff tail. It lived in a relatively dry, inland environment and may have eaten insects, lizards, and other small prey.

While it is undoubtedly a small, bipedal carnivore, the extremely poor preservation of the only known Procompsognathus fossil makes its exact identity difficult to determine. It has historically been considered a theropod dinosaur, though some, such as Allen (2004), have found Procompsognathus to be a primitive, non-dinosaurian ornithodiran.[1] Sereno and Wild (1992) stated that the holotype specimen consisted of fossils from two separate animals. They referred the skull to the primitive crocodylomorph Saltoposuchus, and the remainder of the skeleton to a ceratosaur related to Segisaurus.[2] Rauhut and Hungerbuhler (2000) noted features of the vertebrae which suggest that Procompsognathus may be a coelophysid or ceratosaur, and Carrano et al. (2005), in their re-study of the related genus Segisaurus, found both Segisaurus and Procompsognathus to belong to the Coelophysidae within Dinosauria.[3][4]

In Michael Crichton's novels Jurassic Park and The Lost World, Procompsognathus (often referred to as "compys") are one of the extinct species recreated through genetic engineering. Crichton portrays these dinosaurs as being venomous, a characteristic invented for the novel and not supported by fossil evidence. He also portrays them as scavengers and coprophagists (eaters of feces), useful in keeping the park clean of sauropod excrement. In the film adaptation of The Lost World, Procompsognathus were replaced with the distantly related coelurosaur Compsognathus. However, in the second film, Robert Burke refers to them as Compsognathus triassicus (triassicus being the type species of Procompsognathus).

In Eric Garcia's trio of "Rex" novels, Procompsognathus is one of sixteen genera to survive into the present day. As in Jurassic Park, Garcia refers to them as "compys". 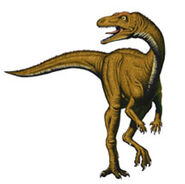 Retrieved from "https://dino.wikia.org/wiki/Procompsognathus?oldid=35214"
Community content is available under CC-BY-SA unless otherwise noted.