Kron is a dictator of the herd and the secondary antagonist in Disney's 2000 CG film Dinosaur (the main antagonists being the Carnotaurs). He is the leader of the herd that he is taking to the Nesting Grounds. He is stubborn, imperialistic, selfish, and a real bully. He believes in survival of the fittest, regardless of whether it's a nameless member of the herd or his own right-hand dinosaur Bruton. He was voiced by Samuel E. Wright.

Kron is a hardline, no-nonsense leader. Believing heavily in survival of the fittest, he feels no pity for members of the herd who die along the way to the Nesting Grounds. The exception is his sister whom he genuinely cares for; however, he often doesn't listen to her, and even ignores his sister's advice. While he seems cruel, he's actually the closest to real animal behavior of all the speaking dinosaurs in the movie. Most herds will willingly let the sick, old, and the weak be taken out by predators; this will both save the healthy members from injury, and will help the species on the whole.

In the movie, when Aladar and his lemur family have just escaped from a pack of hungry raptor dinosaurs, Aladar looks up and sees Kron leading the dinosaur herd to which Kron knocks him down and shouts, "STAY OUT OF MY WAY!" When the herd stops soon after to rest, Aladar meets two old dinosaurs named Baylene, Url, and Eema who say that Kron the leader is driving them unmercifully to the Nesting Grounds so when Kron walks by Aladar asks her, "What's his problem?" Strangely enough here, despite having met before, Aladar cannot remember who Kron is until Eema refreshes him. Aladar soon stops him and asks him if he could slow it down a bit for the old dinosaurs who are having trouble keeping up, to which Kron replies sarcastically, "Let the weak set the pace? Now there's an idea." He then tells Aladar to let him (Kron) do the thinking and to watch himself, to which Kron's sister Neera replies to Aladar, "Don't worry, that's how my brother treats newcomers, no matter how charming they are."

The next day as the herd is traveling to get to the lake, Kron tells his second-in-command, Bruton, to give orders that the herd must keep up because if a predator catches anyone they're on their own. Kron drives the herd unmercifully across the hot sunny desert, losing a couple of members in the process, until they finally reach the lake. However, when Kron reaches the top, he and the rest of the herd are shocked to see that the lake is a dry bed caused by the fireball earlier in the film. Bruton appears by his side and tells him the rain might be collected somewhere else, and tells him, "What do you want us to do?" Kron tells Bruton to take a scout and check the perimeter, and he orders the herd to keep moving. Neera tells Kron that if they keep moving like this they'll lose half of the herd, to which Kron replies. "Then we'll save the half that deserves to live." Luckily, Aladar finds water by Baylene pressing down on her foot, causing water to come out of the ground. Far from grateful, Kron pushes his way into it and drinks the water for himself showing no mercy for the herd. Soon after, the herd rests for the night.

In the meantime, Bruton and his scout are accosted by two Carnotaurs during their search, and only Bruton escapes with severe wounds. As Kron watches the herd sleep (and eyes Aladar and Neera becoming closer) Bruton returns, telling him that Carnotaurs are coming, but Kron promptly berates him for leading them to their location. As Kron moves the herd Neera and Aladar approach and ask what was going on, to which Kron says that the Carnotaurs are coming and if they don't move, they'll catch up to them. Aladar tells Kron that the old ones won't make it to which Kron says they'll slow down the predators. Aladar tries to stop the herd but Kron pushes him down and tells him that if he ever interferes again he will kill him. Kron then pushes Neera along with the Herd while Aladar stays behind with his family, Eema, Baylene, and Url.

Kron continues to push the herd on unmercifully until they reach the rocky hill entrance into the Nesting Grounds, and discover to their horror that it has been blocked by a landslide. Kron orders the herd to start climbing up the hill to which they do until Aladar returns, telling Kron to get the herd out of there because a Carnotaur is coming and that he knows a safer way to the Nesting Grounds. He also tells him that the herd can't get over the rocks because there's a sheer drop on the other side. Kron stubbornly refuses to listen, and Aladar eventually yells that Kron is going to kill the herd, and attempts to lead the herd out of the canyon. Enraged, Kron violently attacks and almost kills him until Neera pushes her brother away from him. Before Kron's eyes, she proceeds to follow Aladar out the canyon and the herd, shocked by Kron's actions, abandon their former leader and do the same.

At that moment, the Carnotaur appears. Kron begins climbing the hill, and in a last attempt to regain leadership, urges the herd to do the same and Aladar lead the Carnotaur to them. However, Aladar and the Herd manage to stand together and pass the beast, while Kron continues up the hill, determined to prove Aladar wrong. Though foiled by the herd, the Carnotaur sees Kron and starts to climb the hill after him, while Neera and Aladar follow in order to help him. Kron manages to reach the top, only to discover that Aladar was right about the sheer drop, and is promptly cornered by the Carnotaur. Kron tries to fight the Carnotaur, but the beast bites into his back and throws him against a rock, mortally wounding him. Before it can finish him off, Neera and Aladar come and knock it off the cliff. Kron dies of his injuries during the battle, as a grief-stricken Neera discovers once the Carnotaur has been killed. Despite all he had done, Neera is deeply saddened by Kron's death, and is comforted by Aladar before they depart for the Nesting Grounds. 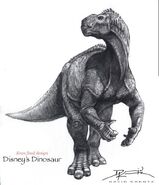 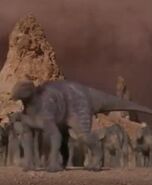 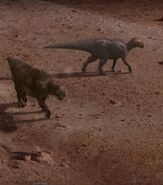 Retrieved from "https://dino.wikia.org/wiki/Kron?oldid=30233"
Community content is available under CC-BY-SA unless otherwise noted.