Jurassic Park: The Ride, is a Jurassic Park water ride at Universal Studios Hollywood (Not to be confused with the one in Orlando). It is known for the almost 26 meter (85 feet) plunge near the end of the ride.

The concept is that Jurassic Park opened as planned; the river adventure is an actual attraction in the park itself. It begins as the boat rises against an elevation, followed by a small plunge. Then the boat goes through the Jurassic Park Gate.

In the Ultrasaurus Lagoon, the visitor encounters a large adult Ultrasaurus and its young. Two Psittacosaurus can be seen in the Lagoon.

The boat goes through a cave. The next area is Stegosaurus Spring, this part of the park is volcanic (like Stegosaurus South in the novel). On both sides of the river stands a Stegosaurus.

The raft begins heading toward a part of the park known as Hadrosaur Cove. A duck-billed Parasaurolophus bumps the raft, causing it to begin drifting into the Raptor Containment Area...

Raptor Containment Section, a section of the adventure that (according to voiceovers on the ride) had never successfully been integrated into the rest of the park. "Unauthorized Entry," says a female voice over the intercom. The raft passes by a replica of the Raptor Pen from the film, and riders hear snarling Velociraptors in the dense foliage while branches move to simulate the creatures attempting to escape from their confines. A small hole is torn in the fence. Turning a corner, riders see a boat that appears to be in a state of disrepair with a Dilophosaurus chewing on the remains of the passengers. The boat heads towards the pump station where riders see a Velociraptor run into a dark corner. On a wall next to the riders a Jurassic Park jeep nearly falls on the guests.

As the raft moves towards the Water Treatment Plant, two Dilophosaurus jump up on both sides of the boat, spitting their poisonous venom (actually water) at the passengers. The riders begin to slowly head up a hill into the large building in silence. The riders enter a dark tunnel with several mock red lights on the ceiling. Several Velociraptors jump out of tangles of piping at the guests. A raptor is seen tearing up a control panel. As the raft follows an 180 degree turn, the snout of a T.rex breaks through the roof, spilling water on the boat. "Attention, this is an emergency. Toxic gases are present in this area. Life support is imminent...Life support systems will terminate in 15 seconds...10, 9, 8, 7, 6," says a female voice over the intercom. The Tyrannosaurus's head reappears once more in front of the riders, roaring and growling very loudly, to distract them from the 85 ft plunge below. "5, 4, 3, 2, 1," and as the T. rex bends its head down to roar and attempt to eat the riders, the raft plunges down almost 26 meters (85 feet) at a 54 degree angle. Template:- 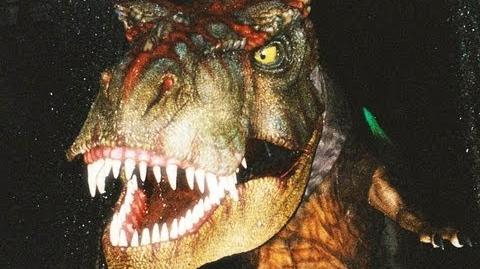 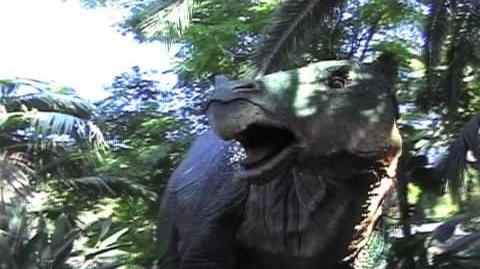 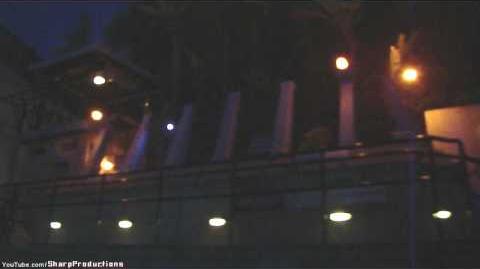 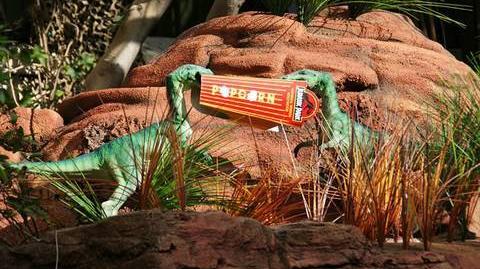 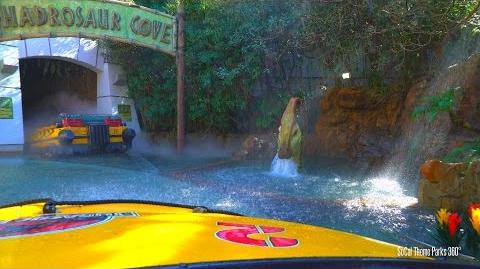 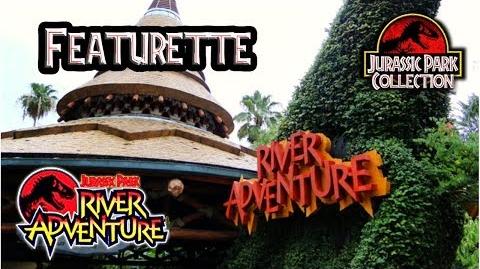 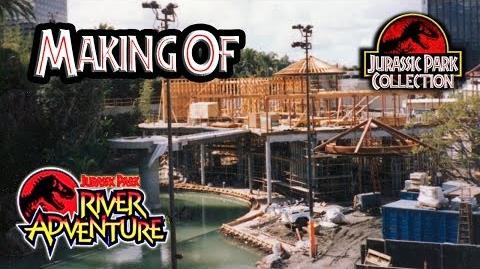 Making of Jurassic Park The Ride 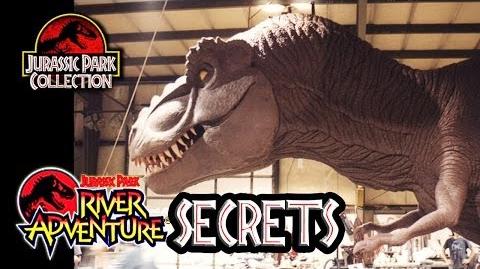 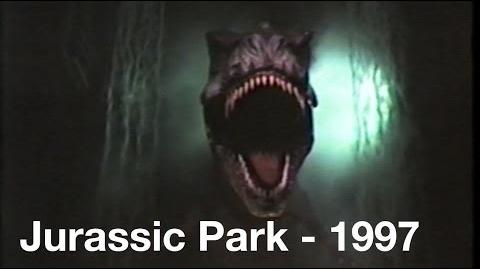 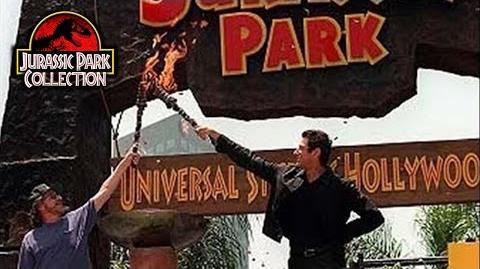 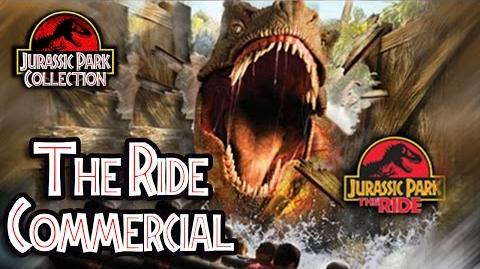 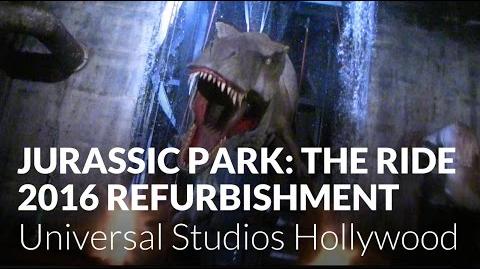 Steven Spielberg told CNN: "I had the idea to do a ride even before we shot the movie," producer Spielberg explained. "Universal trusted us and they said OK. And 18 months before the film was in release, the ride was already on the drawing board."

Those drawing boards were used as props in scenes in the movie. In the Lunch Scene in the film (near the beginning), there is concept art of the ride.

As Phil Hettema of Universal Studios Hollywood's attraction development department said, "Deciding to do 'Jurassic Park: the Ride' was, as they say, a no-brainer. We knew everybody would want to see this come to life. But, making it come to life really was the challenge. When Steven Spielberg made the movie, he kind of raised the bar on what people expect."

The production costs of this ride were ~$110 million Dollars; which is almost twice as expensive as the movie ($63 million).

The reproductions of creatures seen in the movie were only one of the hurdles to creating a theme park that meets Universal criteria. "You have to understand that these are full-size animals," Spielberg said of the park's creatures. The movie was able to cheat a little by using computer-generated images, which gave the animals a fuller range of motion than life-size models. But, Spielberg said, "These I think -- in my opinion -- are the most realistic animatronic actors I have ever seen perform in any of the theme parks of the world."[1]

Leviathans of another type were also employed on the corner of the Universal Studios Hollywood site, where miles of computer cable, vast water pumping and filtration systems, hydraulic controllers for the dinosaurs, and lots of old-fashioned hard work went into making the ride a reality.

On June 21, 1996 (3 years after the movie's release) the Ride was opened. Steven Spielberg and Jeff Goldblum lid the fires of the Jurassic Park Gate in front of the attraction.

Steven Spielberg signed his name in cement to commemorate the occasion (see below).

The first group of people who rode the river adventure were cast members (Jeff Goldblum, Ariana Richards, and Joseph Mazzello) from the movie series it was based on. Steven Spielberg also attended, but asked to be taken off before the 80 foot drop due to acrophobia.

Steven Spielberg said about The Ride: "You want to take your 3-year-old on the first 30 percent of it, then you want to leave your 15-year-old at home for the rest." Template:-

For a complete list, see Jurassic Park: The Ride merchandise.

Retrieved from "https://dino.wikia.org/wiki/Jurassic_Park:_The_Ride_(Hollywood)?oldid=34788"
Community content is available under CC-BY-SA unless otherwise noted.