The premise is that John Hammond was allowed to rebuild a Jurassic Park on an island near Orlando. This attraction is a river ride through that park.

It begins as the boat rises against an elevation, followed by a small plunge. Then the boat goes through the Jurassic Park Gate.

In the Ultrasaurus Lagoon the visitor encounters a large adult Ultrasaurus which raises its neck high above the riders then slower lowers it back near the water.

Two Psittacosaurus can be seen in the Lagoon eating plants and drinking the water nearby. Template:-

The boat goes through a cave with water trickling down the sides. The next area is Stegosaurus Spring, this part of the park is volcanic (like Stegosaur South in the novel). On both sides of the river stands a Stegosaurus. One is much bigger than the other, towering over the raft and its riders. This suggests that the other may be a juvenile.

The raft begins heading toward a part of the park known as Hadrosaur Cove. One large Parasaurolophus pokes its head up from the water and shoots water from its nose on guests. Seconds later a startled duck-billed Parasaurolophus bumps the raft, causing it to begin drifting into the Raptor Containment Area...

Raptor Containment Section, a section of the adventure that (according to voiceovers on the ride) had never successfully been integrated into the rest of the park. Off in the jungle area to the right, Raptors can be heard, who rustle the bushes and plants. The raft passes by a replica of the Raptor Pen from the film, and riders hear snarling Velociraptors in the dense foliage while branches move to simulate the creatures attempting to escape from their confines. A large hole is torn into the wires in the fence. Two Compsognathus are seen fighting over a bloody shirt (The CP 25 which has been sent by Jurassic Park Animal Control to guide the boat towards a safe area but the compsognathus encountered and killed the crew). The boat heads towards the water treatment plant where riders see a Velociraptor run into a dark corner. A large crate with something snarling inside, presumably a raptor, also nearly falls on the riders.

The riders begin to slowly head up a hill into a large building in silence. The riders enter a dark tunnel with several pipes near the ceiling. To the right of the riders there is a shadow of two raptors growling inside a pen. A Velociraptor now jumps out of a dark corner and begins sqealing and clawing at a gate sparking with electricity. Another raptor is seen jumping up from a control panel and snarls at guests. As the raft follows a short drop and a right turn, sirens begin blazing loudly only to stop seconds later. Suddenly a loud (fairly high pitched) Dilophosaur squeal is heard. followed by a frill-less dilophosaur snarling at the riders. A loud roar then can be heard , and large 3 fingered claw mark can be seen ripping threw the wall. Moments after, a few Dilophosaurus jump up beside the boat, spitting their poisonous venom (actually water) at the passengers. In front of the riders is a couple of flashing lights as well as mist and fog. Seconds later the head of a Tyrannosaurus appears in front of the riders, roaring and growling very loudly. He roars loud and bends over snapping his jaws, then later raises his mouth towards the ceiling. As the T. rex bends its head down to try to eat the riders, the raft plunges down an 85 ft near-vertical drop. 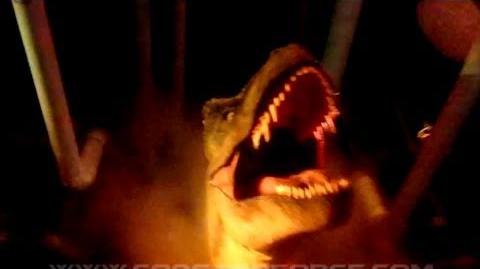 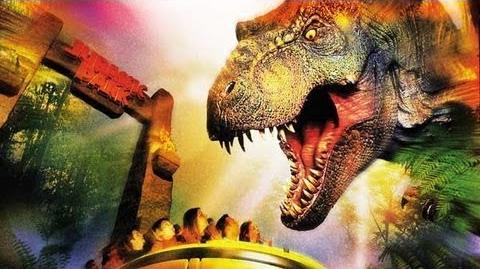 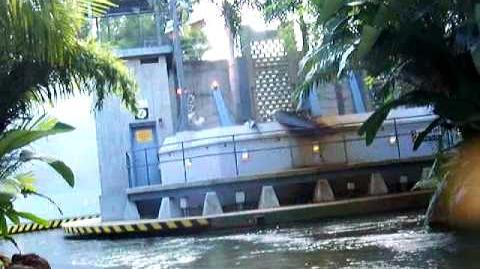 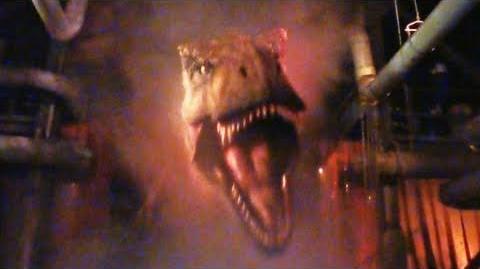 Retrieved from "https://dino.wikia.org/wiki/Jurassic_Park:_River_Adventure?oldid=34790"
Community content is available under CC-BY-SA unless otherwise noted.