Dinilysia (meaning "terrible ilysia") is an extinct genus of snake from the Late Cretaceous (Coniacian) of South America. The snake reached a length of 6-10 feet (1.8-3 meters) and preyed on smaller animals. The shape of the animal's skull does not support the suggestion that snakes were burrowers during their ancestry; it is clear that Dinilysia was terrestrial.

According to supplementary material posted online at the BBC website, Dinilysia was the snake that appeared in the final episode of the 1999 documentary series Walking with Dinosaurs. The creature was live-acted by a modern-day red-tailed boa, though the episode was set in North America, and Dinilysia lived 20 million years before Tyrannosaurus and in South America. 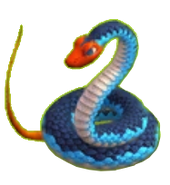 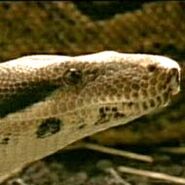 Add a photo to this gallery
Retrieved from "https://dino.wikia.org/wiki/Dinilysia?oldid=35761"
Community content is available under CC-BY-SA unless otherwise noted.